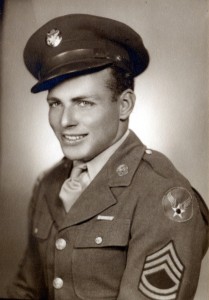 Originally, November 11th was proclaimed “Armistice Day” by President Woodrow Wilson in November 1919 to commemorate the end of World War I.  At the time, World War I was seen as the “war to end all wars” but this changed after the beginning of World War II, which required the greatest mobilization of the Nation’s armed forces. And again later with the United States involvement in Korea, the holiday became “Veterans’ Day” officially on June 1, 1954.  The holiday is intended to recognize and celebrate America’s veterans for their dedication to the country and willingness to serve.

Veterans’ Day is a day set aside to honor the services of all U.S. military veterans of every branch of the U.S. Armed Forces – Navy, Army, Marine Corps, Air Force, and Coast Guard.

Larrick Law Firm is grateful for the service and sacrifice of the members and veterans of the United States Armed Forces.  I have personal dedication to honor the service of my grandfather, Earl W. Rucker, as a World War II veteran.

Fill out this form now and get connected with Larrick Law Firm PC.